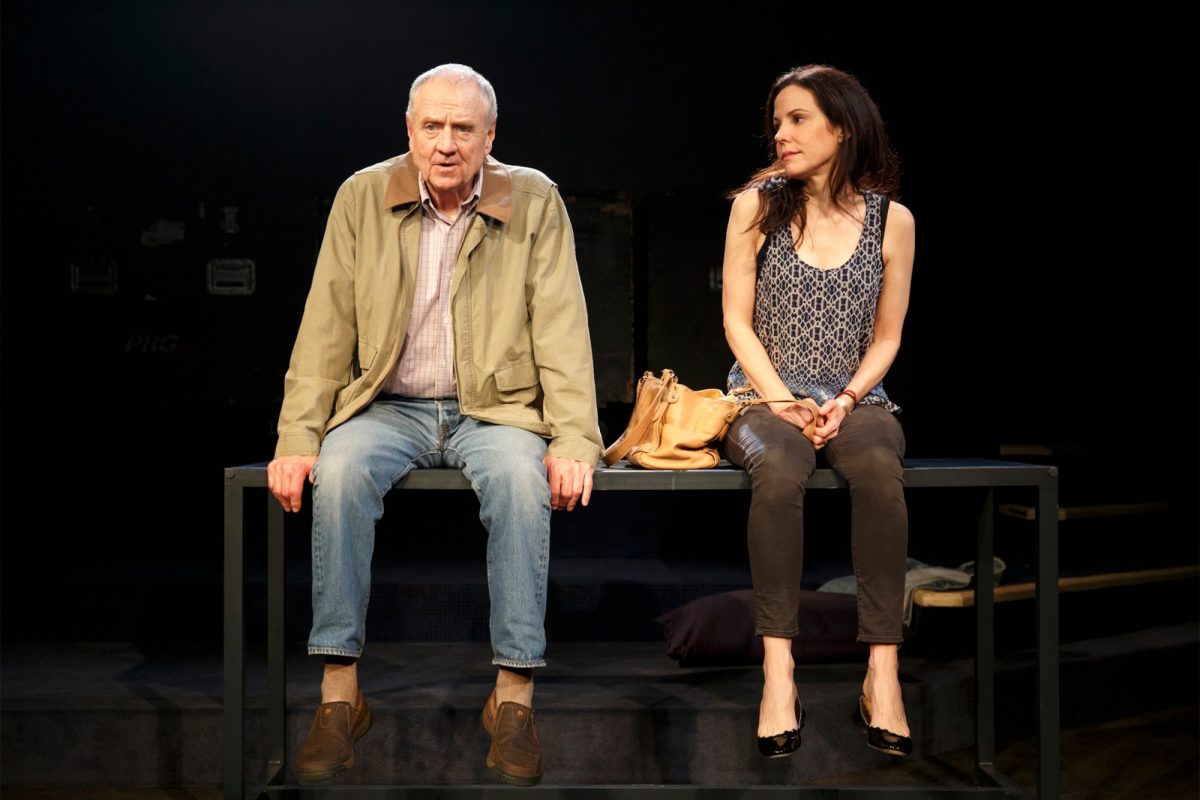 Mary-Louise Parker and Denis Arndt star in a play about secrets, lies, and the joy of listening to every kind of music.”>

Set on the sparest, most un-Broadway-like stage, Simon Stephenss play Heisenberg is an intriguing tale of unlikely love.

With a few tables and chairs, arranged and rearranged by the actors themselves, we are convincingly transportedin an unbroken 80-minute spanfrom train stations to parks, a butchers shop, and a bedroom.

Georgie Burns and Alex Priest, total strangers, meet on the forecourt of Londons St. Pancras station, when she kisses him on the back of his neck.

She is 42, from New Jersey, and apparently very highly strung. He, a thousand times more self-contained, is 75, Irish (from Enniscorthy, County Wexford), and a butcher in North London.

The opposites attract is played for both laughs, and counterintuitively. She, at first, seems utterly bonkers, and he, like us, watches her with befuddlement and a little concern. Surely, you think, he would run a mile.

I have a complete inability to control my own language, she admits. Their surnames seem telling: She does burn, and he initially has the bearing of a priest.

Mary-Louise Parker, most recently famous for her role in Weeds, plays Georgie as a cat on a scorchingly hot roof. She wants to know all about Alex (Denis Arndt, whose freighted stillness bewitches her and us), and he will not tell her anything about himself.

She darts around him, gesticulates, leans in, recoils, laughs, shouts. Her enquiries are loud, relentless, and the more intrusive she is, the more an obelisk of non-confession he becomes.

She tells Alex that she is a waitress at a modish London restaurant and that her husband is dead: Its like I miss him in my skin and my bones and my blood. I miss him on a cellular level. She regrets not having children, she adds.

Theres something about cities that just makes me really fucking happy, she says, any notion of overshare totally absent. Its the monumental amount of people. The gaps in between them creates this crackle. I find it intoxicating.

Alex is so stolid and Georgie so skittish that the impulse seems less set toward romance between them than simply whether they can survive being in each others company without some harm, physical or psychological, being done.

Parker and Arndt are each others perfect foil. Nothing is overstated or overplayed: The lack of adornment in Mark Wendlands stage design focuses the audiences mind on Stephenss crisp, witty text and Mark Brokaws unflashy direction.

The duos second encounter takes place five days later at his butchers. Alex again is puzzled and irritated at Georgies intrusion, responding gruffly to her admission that she had Googled his name with I dont know what to say about that.

This encounter turns her story on its head: She admits she has lied to him. I think its probably best if you assume that everything I told you when I saw you last week was a complete fabrication.

His rigidity in the face of her incursionsAre you a bit freaked out now? she asks. A little, he repliesmakes for a fascinating parry and thrust and cat-and-mouse. But again, that nagging question: At this point, wouldnt you just take your leave? Alex, implausibly, does not.

Thank You!
You are now subscribed to the Daily Digest and Cheat Sheet. We will not share your email with anyone for any reason

Still, at this point the play pirouettes to bring him out of his shell. Im not shy, Alex says, ushering from this quiet man the most unquiet of speechesthe first of a standout trio, in which he decries the obsession with feeling in todays world. Alex, it turns out, is full of passion.

You cant go anywhere without these fucking wretched conversations about feelings being shoved down your throat, he says. Literally down your throat. With clenched fists. I feel my clothes and the wind on my face. I dont feel. I fucking think.

Hes a great dancer, he reveals. Teach me, she says coquettishly. I dont teach. I dance with other dancers. Go and learn. Then come back and ask me again, is his light response.

Both he and she reveal a litany of true past hurts. At the next scene, a Turkish restaurant in Holborn, Alex says: Ive never spoken as honestly as this about anything before. It feels as a bit like having an electric shock.

Love has eluded both Alex and Georgie for very different reasons, but even chewing over this doesnt bring saccharine confessions and pat self-discovery.

If Alex has a bedrock of pain, he lives with an eye to pleasure: He loves both walking everywhere and music, and in a truly delightful speech recites the genres of music he listens to.

Arndt recites this on-the-page-prosaic list with lilting, serenely punctuated precisionhalf an exercise in composition, half an exercise in watching his face break out in excitement and joy: I started with rock n roll. And then I moved on to rhythm and blues. Gospel music. Country and Western. And Mod music. Garage rock. Psychedelic. Hippie music. Jazz music. Funk. String quartets And it goes on, we tickled by each new addition, until the conclusiondub step, said as lightly as you will ever hear that said.

Later, Arndt performs a completely charming mini-act of ballet, which was greeted with a chorus of wows from our audience.

However, we discover, the kiss on the neck at the station hadnt been so spontaneous after all, which may have been obvious to those deconstructing the title of the play carefully: The Heisenberg Principle asserts there is a limit to the precision with which certain pairs of physical properties of a particle can ever be fixed.

The play doesnt overtly state this, or even mention Heisenberg, so all your Heisenberg homework must be done before or after seeing the play. My guess: Alex and Georgie possess behavior and personalities unknowable singly, and even more so having collided together.

Personalities are just the sum of the individual things that people do, Georgie says. And the path that connects between them. Theyre never fixed. They can always change. They mean nothing.

The plays denouement takes place overlooking the Hackensack River in New Jersey, Alex savoring its foreign-to-him name as well as the Pulaski Skyway. Another tour de force speech about love in the everyday, spoken initially as a repudiation of love, was equally savored by our audience.

The play has divided critics. It was hailed by The New York Times when it was first performed last year, but others have found Heisenberg trite. For me, its romantic focus was plausibly leavened with big themes, its two lead performances were in thrumming tandemwith Arndt particularly winning.

It still seems baffling Alex didnt run a mile on that first meeting, though.